We often watch the Ellen show on TV, it’s good for laughs, and she frequently has guests that are some of the top names in music, performing, and news.

Ellen is quite well off from the top-rated show, and she tends to be generous. In one of her regular segments, she sends “Senior Head Twit” (Ellen’s label) Jeannie out to surprise a person in the community, who has either written to Ellen about financial difficulties, or has been recommended by a friend. I anticipate that thousands write in, but logically only a few are chosen, making the arrival of Senior Head Twit Jeannie a surprise.

The usual situation is that Ellen will call the lucky person on the phone during a live show, while Jeannie and a camera crew wait outside the person’s house. After the initial shock of receiving the phone call ends (it seems to frequently provoke lengthy screams), Ellen will mention that it appears someone is knocking on the recipient’s door, and it is, of course, Jeannie and the crew, often bringing an attaché case of about $10,000 and/or a new automobile.

It’s typical for the woman receiving the gifts to burst from the house, rushing into the arms of Jeannie, tears running down her cheeks as they do a joyous dance of hugs.

I sometimes sit there thinking, “How marvelous!”

It’s not the thousands of dollars or the beautiful Buick at curb side. It’s not the thrill of the family being given a much-needed shot of optimism.

It’s my age, and the fact that I was a teen and young adult in the late 50’s and early 60’s, and then and later in my teaching career I took an interest in the racial unrest in North America, particularly in the southern United States. You see, financial crisis is the prime qualification for the appearance of Senior Head Twit Jeannie, and because of that, and because of the still financial imbalance in the US along racial lines, often the woman receiving the gift is black.

Jeannie is white, and there is absolutely no hesitation, as there should not be, in the two of them rushing into each others arms in the dance of joy. There is no hesitation in Jeannie scooping up the little children clustering around their feet. Thankfully, it’s a new generation.

It was not always that way, obviously– in fact it was drastically and tragically not that way. I find the young people of today have little appreciation of that fact, since to many of them the 60’s and beyond are as relevant as the days of Julius Caesar.

This article would stretch to longer than my novel if I attempted to go into a litany of hate crimes against blacks over the last century and a half. In the hundred years up to 1968, some five thousand blacks were lynched in southern United States, many for “crimes” as absurd as not stepping aside in time from a white person’s walking path or from the path of his vehicle. For the vast majority of these beatings, hangings, and burnings no one was ever charged or punished. 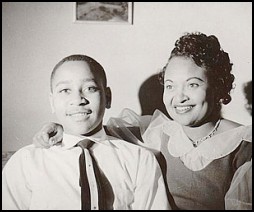 In 1955, fourteen year old Emmett Till, visiting from Chicago and apparently naïve about the situation with blacks in the south, made a comment to a 21 year old white woman in a store. What he said is not clear to this day, but making any comment to a white woman was unheard of at that time. It was possibly flippant, the most likely words being, “Bye, Babe”.  The woman’s husband and his brother went to the house where Emmett was visiting that evening. They took the youth and, probably in the company of other men, beat him severely, breaking his leg and gouging out one eye. They then shot him, tied a large metal fan around his neck with barbed wire, and threw his body into a river.  He was found by family three days later.

The husband and brother were arrested, went to trial, and were acquitted. One jury member later told a reporter that he didn’t think any white person should go to jail for killing a black person (of course “words to that effect”).

Emmett’s body was sent back to Chicago, and his mother displayed him in his casket as he was found, refusing any repair by morticians. Tens of thousands attended the macabre viewing and funeral, and it made national news. One of the arguments at trial was that Emmett’s body was so damaged that positive identification could not be done at that time. In 2004 he was exhumed, positive identification made, and he was reburied in a new casket. His original casket resides in the Smithsonian. Emmett was only one of many. 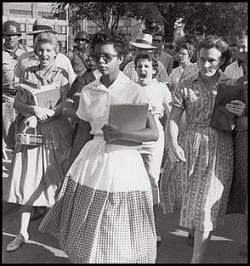 In 1957 a group of nine young students attempted to register at Little Rock Central High School. This was but one of many actions by black children at that time, demonstrating courage that most us could never muster. They were initially prevented from entering the school by the Arkansas National Guard, under orders of the Governor. A mob of people followed them, many calling for a lynching. One of the nine black students, Elizabeth Eckford, recalled:

They moved closer and closer … Somebody started yelling … I tried to see a friendly face somewhere in the crowd—someone who maybe could help. I looked into the face of an old woman and it seemed a kind face, but when I looked at her again, she spat on me.

President Eisenhower called out the 101st Airborne Division of the army, and for the balance of the year, these soldiers formed lines to escort the nine into the school. In spite of that, they were of course taunted, spit on, and abused as much as the white students were able to do. The following year, the governor managed to get a law through the state legislature allowing him to close the schools to prevent integration, and the state schools were closed for a year. Only two of the nine returned after forced reopening the next year, but all managed to complete their high school in other locations, generally at relatives’ homes in the north, and went on to university and mainly professional careers.

While it seems that racial prejudice has faded with time, there is still a lot of deep-seated hatred in the south that will likely only pass with the generations. Emmett’s case was only one of many murders at that time, and many more took place in the late 50’s and into the 60’s. As late as 1998 a final racial killing took place when three white supremacists dragged a 49-year old black man behind their truck for miles, dumped his body at a black cemetery, and went to a barbecue.

While teaching history, or even in English class when reading poems or stories by black authors, I often brought in some of the stories of this long struggle for equality. Students were frequently surprised by the little steps that were made, made in what (at least to me) were relatively recent years.

In 1968 British singer Petula Clark touched Harry Belafonte’s arm during the filming of a TV special.  Sponsor Chrysler requested that the segment be deleted from the show before airing. Clark refused, and she managed to get all alternate takes of the scene deleted. The “questionable” segment was aired.

Nat King Cole, like many black performers who later became famous to a wider audience, initially played only in black concerts, and was on occasion beaten for not behaving as some whites felt he should.

Famous for “going where no man has gone before”, Star Trek managed it as well when William Shatner kissed Nichelle Nichols (Lieutenant Uhura) in late 1968. Believe it or not, that is cited as the first interracial kiss on American television.

—-
So here we are in 2010, and the ghosts of Emmett Till, Lamar Smith, Mack Charles Parker, Felton Turner, William L. Moore, Madgar Evers, Oneal Moore, James Byrd Jr., and thousands of other blacks (and sometimes murdered sympathetic whites like Viola Liuzzo) watch from the shadows. On a dark evening in Arkansas, in Mississippi, in Alabama, Senior Head Twit Jeannie beats on a door, grinning from ear to ear, and a woman bursts from inside, rushing into her open arms.

I smile. Isn’t that marvelous?