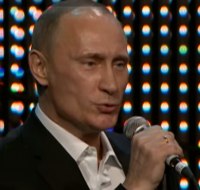 Occasionally things you see or hear do a twist on your brain—too bizarre to fit into place in the view you have constructed.

So it was when I (wait for it . . .) first heard Vladimir Putin singing “Blueberry Hill”.  I kid you not.  Where do you fit that?  The memories of Fats Domino with the original hit, of Richie Cunningham warbling his theme song, fade—or perhaps are driven from the mind.

We’ve a dozen crises on the world stage at the moment, each temporarily jostling the other out of focus with new surges of violence; the Ukraine is just one of them, but it has its claim to being unique.  It appears, and I say that honestly, because we receive our news coloured by the political lenses we are forced to see through, that Russian Federation leader Vladimir Putin has every intention of taking over as much of the country of Ukraine as possible, bit by bit, whether the rest of the world likes it or not.  Currently it appears that Russian troops are active in the Ukraine, but there is always an excuse coming from Putin and his henchmen:  these men are actually on vacation, and voluntarily going there to “fight for freedom”.

This isn’t a takeover by frenzied terrorists like ISIS swarming down Iraq.  This seems a reasonably slow, calculated attempt to build the Russian Federation back towards some dream of the grandeur of the Union of Soviet Socialist Republics.  News reports paint a picture of lies and subterfuge, of military manoeuvring and accompanying denials that are reminiscent of children at play:  “He did it!”  “What?  Me?”  Smirk.  “Couldn’t have been me!”

Putin is a strange fellow.  Though very nervous at times, he has considerable ego.  Certainly it would be hard to think of Putin and Harper side-by-side as world leaders when we see Putin riding horses shirtless, jousting in martial arts, and making sudden casual appearances among the crowds at sporting events.  Harper seems ill at ease with the smallest of casual situations, even the act of wearing a cap.  Though Harper could better Putin at the piano, and probably at “Blueberry Hill”, it would not have the shock effect of viewing Putin warbling.

Why, despite the worldwide opposition, does he seem intent on inching his way into the Ukraine?  Because he can.  Like the schoolboy who levels the F-word at a teacher, he’s made the realization that ultimately no one is going to do much about it.  Perhaps in his case economic sanctions will have an effect, perhaps Putin and Russia have to pay attention to this new kind of punishment, but like the schoolboy who just puts up with some harsh words in the Principal’s office, perhaps Putin walks away realizing—they can’t really do much about it.

There are a number of countries in the world that we generally label as Superpowers, and Russia, despite the blows it has taken from the breakup of the Union, is one of them.  When a Superpower makes a move, the only balanced response is from another Superpower, and historically the balance has come from the United States.

During the years of the Cold War, the US and the USSR came to something of a forced stalemate.  Like two enemies armed to the teeth, they formed an unspoken agreement that there was little benefit for either in “getting into it”.  It became a policy for peace, as crazy a policy for preventing war as the world has seen: Mutually Assured Destruction (try the acronym: “MAD”).  The US and the USSR could not get into it, as between them they were capable of almost completely destroying each other, as well as most of the rest of the earth.  The unfortunate aspect of this “peace” was that for some time each continued to build up nuclear arsenals, in the notion that if one is capable of destroying the other ten times over, it is dangerous to only be capable of destroying the other five times over.  Disarmament has been slow in taking place because of this feeling, coupled with the situation of nations like China also arming themselves and not showing any willingness to disarm.

Instead of actual confrontation between cold war enemies, we have been treated to the funnelling of disagreements through relatively small wars in small countries, as with Syria at present, where Russia and United States generally support different factions.  I say “generally” because in some of these smaller conflicts, the factions and sides change with time, and the larger nations are often required to alter their support.  When the USSR moved into Afghanistan against the Mujahedeen fighters, the USA supplied weapons and military advice to those repelling the Soviets.  Many of those freedom fighters and their weapons now form the leadership of the Taliban that the US and other nations attempt to hold back from control of Afghanistan.  ISIS was once regarded as one of the rebel groups against the Assad regime in Syria, nominally supported by the American government, but now the US and—of all countries—Iran seemed headed for uneasy cooperation against the gathering storm of ISIS militants.

Putin may be eccentric, but he is no fool.  His plan for the Ukraine might be set back by Russian businessmen beating their fists on his doors over economic sanctions, but otherwise, he will wait it out, moving chess pieces slowly into place with a sly grin, waiting for the other side to blink.  What can the rest of the world do?

If you were close enough, perhaps you could even hear his voice softly:  “I found my thrill…”

The Link:  Putin and Blueberry Hill