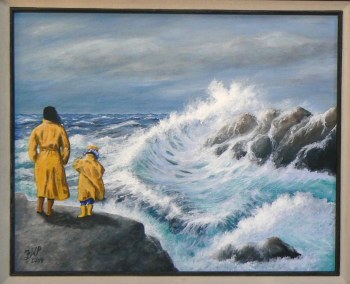 For a number of years when I first started working down here, I used to take wedding pictures. Something of a hobby, made a little money at it. I would just do a budget job, flat fee, take about 72 pictures (two rolls of 36, for those who have forgotten, or never knew the days of Kodachrome), and when the first prints were back, I would just hand over the prints and negatives to the couple to do what they wished for copies and enlargements.

“Let me tell you an interesting story,” I said to a few friends in early December. “Thirty years ago…” I started, and I’m sure they hoped I didn’t fill in all the missing time, but I had their attention.

Saturday evening. July, 1983. I was watching TV when Ellen said the unforgettable words: “Didn’t you have a wedding this evening?”

KaPow! Out of my chair! The wedding was at 7 pm, was about ten kilometers away, and it was almost that time. I grabbed my camera equipment and raced out the door.

I had no film on hand, so the unfortunate but mandatory first stop was a small convenience store on the way, where in a panic I ran in and bought a few rolls. I tore back out of the store to receive the next blow: the camera, flash, and long lens were on the car seat, so I had locked the car. The keys—still in the ignition! I was locked out!

There was another teacher in the store, so I pleaded with her to immediately drive me home to get other keys.

Ellen had watched me tear out of the house and speed away. Twenty minutes later she was amazed to see me driven home again. Into the house for spare keys, and back to the store!

Sadly, dear reader (as they say), I missed the wedding ceremony. Completely. Got there on the shift to the reception, apologized profusely to people who were not too happy, at least about that aspect of their special day. You can’t do it over. I took the usual posed pictures, took the reception pictures, and when prints and negatives came back, gave them all to the couple—no charge, of course.

That was one event that certainly led to my abandoning wedding photography a few years later. It was a stressful job, more so in those days of film, as you never really knew how things went until the processing came back. Your camera or flash could fail you; things could occasionally happen in processing plants—it wasn’t like today with digital cameras, where you see your pictures previewed. Although equipment can still fail, there are now better safeguards. And I could tell you numerous tales of gum-chewing brides, drunken grooms, and doggy poo on the carpet of the living room behind the posed pictures… and much more.

“A couple of weeks ago,” I said, as I brought things back to the present.

I got a call from a fellow named Leslie, not a name I recognized on the phone. He was interested in buying one of my paintings that are hanging in a local restaurant. “Which one?” I asked him. He described it. It was a painting that I considered to be the best of the ones I have done over the last several years. A woman and child in rain gear, standing on a rocky shore, looking out to sea over wild waves and spray. I got lucky with that one, managing to catch a feeling that elevated a painting from being just a picture to one conveying emotion to a viewer.

“Oh, that one’s not for sale,” I said. “It has a little tag in the corner of it that says ‘Not for Sale’. I particularly like that painting, and my wife likes it. We’re going to take it home sometime. I’m sorry.” When it had been initially for sale, I had priced it above what I normally charged for ones of that size.

There was a bit of a pause, and then he laid it on me.

He had pancreatic cancer. It had travelled at least to his liver. The doctors had given him only a few months, and he anticipated that this Christmas would be his last. His wife had fallen in love with my painting in the restaurant, and more than anything he wanted to give it to her for Christmas.

What can you say? What can you do? It rolled out of him so easily, that my sceptical nature interfered. “Let me talk to my wife,” I said. “I’ll call you back in a week or so and let you know.” I was buying time, caught off guard.

I emailed our pastor, and asked her if she happened to know of Leslie. Was he legit? She responded that yes, she knew him. It was legit. He had been given only a few months.

I don’t believe we see dramatic appearances by God in our age, no burning bushes or Michael the Archangel heralding a new dispensation, but I believe in what Frederick Buechner called “whispers from the wings” that we might miss if we aren’t paying attention. Sometimes there are too many coincidences, or things feel strange, like matters are progressing a little out of your control, but you are a participant.

I thought about the painting and Leslie for a while, and wondered if I was somehow being tested. I knew nothing about him or his wife—and really didn’t believe I should, as that would only add noise to the decision, and decisions sometimes have to be taken without any “but…” added to them. There was a fork in the road trip that was already on, and I was given some choice in the path.

I called him back and said, “You can have the painting. Free.”

He argued that he wanted to pay for it, but I insisted that it was free.

Then he said, “You probably don’t remember me. You took the photos at our wedding thirty years ago.”

“Should have taken them,” I added, for I realized then who he was. “But I never got there.”

Sometimes you do get something of a second chance. At least I did.

In mid-December, Leslie and his wife appeared at Ellen’s office, offering a poignant letter from his wife, in thanks for a picture she would treasure (and a feed of lobsters for us). They didn’t find us at home, but knew where Ellen worked. Leslie had gotten worried that he might not make it to Christmas, and presented the picture to her early. There were tears and hugs all around, even with one of Ellen’s co-workers, who knew little of what went on, but heard about it on the spot.

Leslie died last Wednesday, and I went to his funeral Sunday afternoon. They had the now common PowerPoint show of pictures of Leslie with family and friends. In a couple of them, I could see my picture on the wall of their home, and in one picture Leslie was standing alone to the side of it.