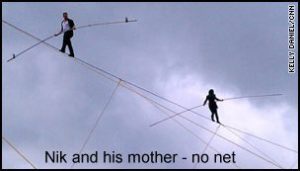 Like most people in at least Canada and the US, I watched with interest the lead-up to Nik Wallenda’s walk across Niagara Falls. Since the actual walk was scheduled for 11:00 pm, and I figured there would be a lot of preamble, I opted for bed and checking in the morning.

I don’t know if I would have been more enticed to watch had he not been dragging a rolling box connecting him securely to the almost two inch steel cable. His worst-case scenario was that he would fall off the wire and end up dangling about five feet below it until they managed to pull him off, perhaps with the aid of a helicopter. That would have been embarrassing, but not fatal to more than his pride.

The tether was apparently mandated by his main sponsor, the ABC Network. They indicated they didn’t want responsibility for any mishap.

I’ve been told that Wallenda kneeled once along the way, but other than that performed no unusual acts on the wire, and finished the walk in about half the expected time. Looking at the news reports the next morning, I had to feel it was a bit of a non-event. Skill was certainly there, but for a Wallenda a bit of routine work. Though I would doubt I could make more than ten feet down the wire, I might have been willing to give it a try myself (for significant compensation), knowing that at the worst I would fall off a few feet and dangle until rescue.
END_OF_DOCUMENT_TOKEN_TO_BE_REPLACED